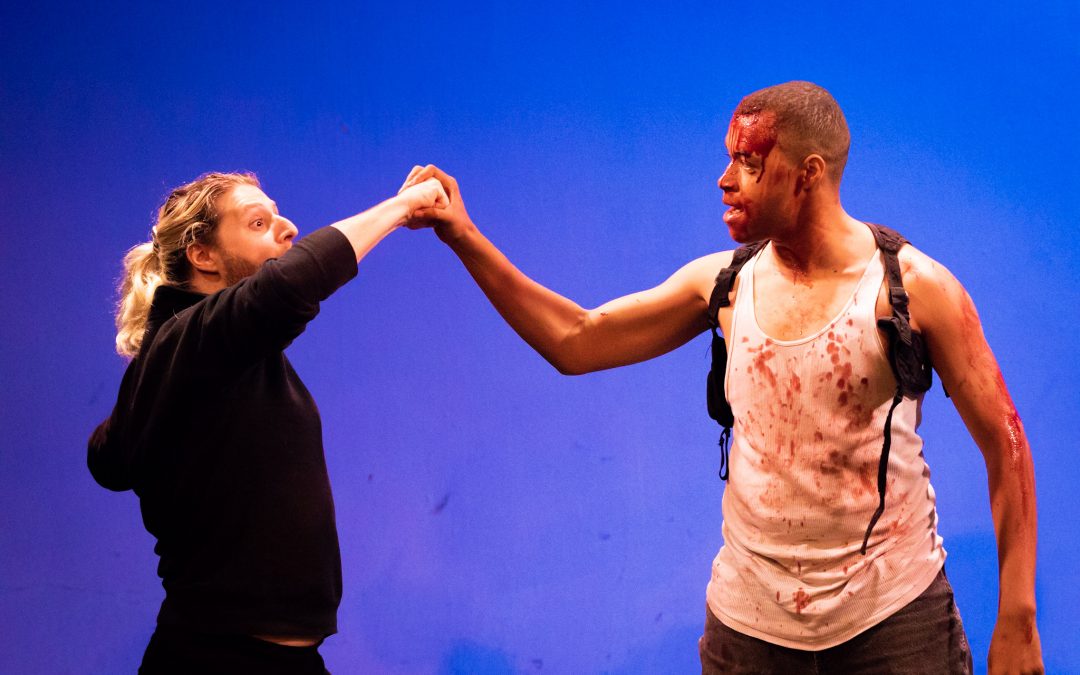 For those of you not interested in the backstory, click here to go right to the recipe. You’re welcome.

‘Tis the season! And by that, I mean it’s almost time for the annual cast viewing of that holiday classic, DIE HARD, as we begin our rehearsal process for the next iteration of Theatre Unleashed’s annual production of A Very DIE HARD Christmas.

And that got me thinking: every year we do this show, we go through gallons – and I mean literal gallons – of fake stage blood.

I don’t think this is much of a spoiler, but John McClane (and by extension, the rest of the cast) ends up covered head-to-toe in this stage blood. It’s an awesome effect, but doing this every night means we have to wash everyone’s costumes after every performance, especially John McClane’s signature undershirts so they’re nice and stark white again.

As you can imagine, this is easier said than done.

As anyone who dabbles in theatrical effects knows, cheap stage blood is very unforgiving and will stain your skin and clothes if you look at it the wrong way, whereas most commercially available bottles of “washable fabric-safe fake blood” come in tiny bottles that are prohibitively expensive.

So, how do we keep the cleaning budget from ballooning out of control? By making it ourselves using my tried and true, super-sexy, fabric-safe, no-stain washable stage blood recipe, that’s how!

When we first mounted the West Coast Premiere of A Very DIE HARD Christmas in 2015, I spent about a month (and a couple hundred dollars) experimenting with different recipes I found.

First off, don’t use any that are soap-based. Just… don’t. Those mixes are incredibly messy, they start to foam up when you sweat, and you absolutely do not want to get that stuff in anyone’s eyes. We were using a very problematic soap-based concoction all the way up until the final dress rehearsal and I was at my wits’ end when one last Google search turned up a recipe involving dark Karo corn syrup and poster paint.

We experimented with this new recipe, and we were somewhat happier with the results. However, we weren’t quite getting the consistent look we wanted. So, we switched it up a bit, swapping in light Karo for the dark syrup, introduced cocoa powder to get the color right, and Bazinga: fake blood!

Easy as that! This recipe is great for theatrical productions, film shoots, and all of your holiday needs! Merry Christmas!

DISCLAIMER: Now, for this to live up to its “no-stain” claim, the trick is that you need to wash the blood out of fabric before it dries, especially white or light-colored fabric. If it dries (and it will within ten to twenty minutes after application), then all bets are off. Forewarned is forearmed.

Footnote to the Disclaimer: We had a few John McClane undershirts get stuck in storage without getting washed one year – gross, I know. When we pulled them out of storage, they were literally dried solid from the blood mix. However, we ran them through the laundry to see what would happen, and both the syrup and the color washed out completely! I wouldn’t recommend this with Grandma’s lace or anything, but this washable formula really lives up to its namesake.

Like my No-Stain Fake Blood Recipe? Have you tried it yourself? Or maybe you have your own stainless, fabric-safe, washable stage blood recipe that works even better? Let me know in the comments below!